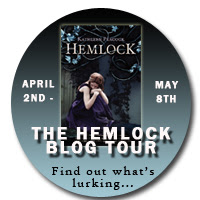 Here's my second post in the Hemlock blog tour, the first post was my review of Hemlock. Go HERE to check it out. I would like to say thanks again to Shannon at Harper Collins Canada for putting together this blog tour and asking me to take part in it, and Kathleen Peacock for writing the amazing Guest Post below.
The Wolves of Hemlock

My intro to werewolves was almost exclusively through the screen. I watched Michael J Fox wolf-out on the basketball court and followed an American werewolf as he ran through the streets of London. Oz stole my heart and Ginger snapped. As much as I loved watching werewolves on screen, though, the thought of writing a werewolf novel was the furthest thing from my mind.
But some of those images stuck.

Shifts that were tied to anxiety and hormones. Bone-crushing transformations. Stories that worked on multiple levels. They were the wish list I kept without consciously thinking about it. When I did finally have an idea for a book—one I thought I could stick with long enough to write—that wish list was combined with a very practical set of story needs to create the Hemlock take on werewolves.

I needed prejudice to divide the characters, so werewolves had to be “out” to the rest of the world.

There had to be an element of fear—even in people who felt sympathy for the wolves—so werewolves became victims of an epidemic which could ensnare anyone.

I needed certain characters in certain places at certain times with their claws out, so shape shifting couldn’t be restricted to the full moon.

I wanted excruciating transformations. Nothing comes without a price, and the strength and speed the wolves gain in Hemlock is paid for with blood and pain. It’s also brutal for the uninfected to watch. Part of the “fun” of writing the transformation scenes is that they’re all filtered through Mac’s fascination and horror.

I wanted the wolves to struggle 24/7. This isn’t a once a month kind of problem, and there is no werewolf Midol. That’s one of the things I liked about the Teen Wolf movies when I was a kid: the wolf came out when the boy was nervous. In Hemlock, the wolf comes closer to the surface when characters are afraid or angry, and some people are better at suppressing it than others. I wanted the wolves to grapple with self-control but ultimately have the choice of using their wolfish side to protect or to harm.

For me, the most interesting takes on supernatural creatures like werewolves and vampires are those that say something about the human condition. Werewolves are set slightly apart from the rest of the world, but they remember what it was like to be fully part of it.

While I hope Hemlock readers like the fight scenes and cringe during the transformations, I also hope they see themselves in the werewolves and take something away from their plight.

Kathleen spent most of her teen years writing short stories. She put her writing dreams on hold while attending college but rediscovered them when office life started leaving her with an allergy to cubicles.

Hemlock, her first novel, will be released on May 8th by Katherine Tegen Books/HarperCollins