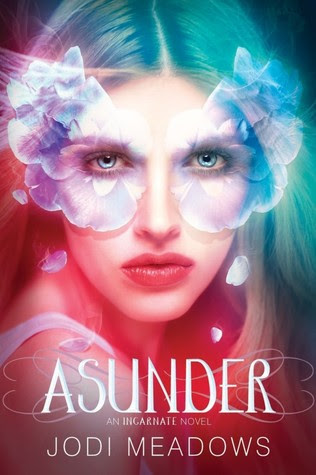 DARKSOULS
Ana has always been the only one. Asunder. Apart. But after Templedark, when many residents of Heart were lost forever, some hold Ana responsible for the darksouls–and the newsouls who may be born in their place.

SHADOWS
Many are afraid of Ana’s presence, a constant reminder of unstoppable changes and the unknown. When sylph begin behaving differently toward her and people turn violent, Ana must learn to stand up not only for herself but for those who cannot stand up for themselves.

LOVE
Ana was told that nosouls can’t love. But newsouls? More than anything, she wants to live and love as an equal among the citizens of Heart, but even when Sam professes his deepest feelings, it seems impossible to overcome a lifetime of rejection.


Review:
After thoroughly enjoying the fantastic world Jodi Meadow created in Incarnate, Asunder was a sequel I couldn't wait to get my hands on. With the super  adorable relationship between Sam and Ana and the new revelations and questions that arose in Asunder, the book certainly does not disappoint.

I absolutely love the world of The New Soul trilogy, it's creative, magical, and unique. The journey that Ana and Sam undergo is just all the more awesome because of the genius world Jodi has created. The tension between the Old Souls and their negative feeling towards New Souls like Ana causes some very dramatic moments that readers will be fascinated with. The writing is also extremely well done, it's very descriptive and beautifully done.

The only thing that I can say against Asunder is that I would love to see some of the mythical creature mentioned throughout the book like trolls and unicorns. Dragons were apart of Incarnate, and were awesome, but seeing more of them and others would be amazing.

With the introduction of new characters,  a well written continuation of Incarnate with the sweetest of all romances, and with an ending that will have you egerly awaiting the final book in the series, Asunder is a sequel you won't want to miss. It's a case where you should jugde a book by it's cover, and this book has a gorgeous cover.
at Wednesday, January 23, 2013