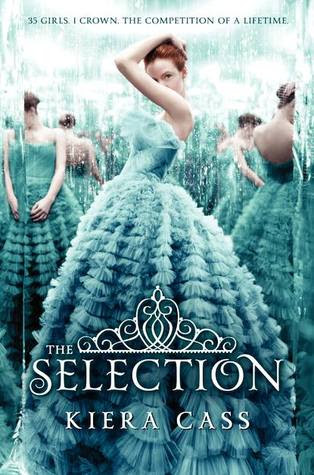 For thirty-five girls, the Selection is the chance of a lifetime. The opportunity to escape the life laid out for them since birth. To be swept up in a world of glittering gowns and priceless jewels. To live in a palace and compete for the heart of gorgeous Prince Maxon.

But for America Singer, being Selected is a nightmare. It means turning her back on her secret love with Aspen, who is a caste below her. Leaving her home to enter a fierce competition for a crown she doesn't want. Living in a palace that is constantly threatened by violent rebel attacks.

Then America meets Prince Maxon. Gradually, she starts to question all the plans she's made for herself—and realizes that the life she's always dreamed of may not compare to a future she never imagined.


Review:
I've debated long and hard as to whether I should write a review on The Selection or not. In the end I decided to in the hopes I could sway those hesitant to pick up this book like myself to do so.
I've had The Selection in my possession since long before it was released in 2012, and just now picked it up. Boy am I glad I did, I absolutely loved The Selection! The dystopian word the Kiera Cass has created is The Hunger Games meets reality TV in the Bachelor. Which in my opinion is an amazing combination and works extremely well together. Right from the first chapter you will automatically be drawn into this amazing world.
As for the characters I loved all the main ones; America, Maxon, and Aspen. Though is respect to the love interest I am partial to Prince Maxon, I would describe him as a gentlemen in sexy form. What I enjoyed the most about the characters in The Selection is the relationship they have with each other, while reading you can really feel the connection and tension at times between them. The other girls part taking in the selection aren't so great and I was glad to see some of them sent home.
All though The Selection lacks on the action it is still a very fast paced read that will have you thinking about it for days after finishing it and have you scrambling to get your hands on The Elite (believe me I know). I would most definitely recommend this book to anyone but because of it's nature I feel it would be more suited for the female audience.