Through the Zombie Glass Review 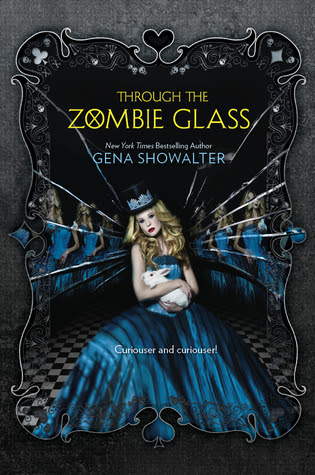 Inspired by the childhood classic Alice in Wonderland, this harrowing and romantic story features teen zombie slayer Alice Bell who has lost so much—family, friends, her home. After a strange new zombie attack, Alice fears she may be losing her mind as well. A terrible darkness blooms inside her, urging her to do wicked things. The whispers of the dead assault her ears and mirrors seem to come frighteningly to life. She’s never needed her team of zombie slayers more—including her boyfriend, Cole—than she does now. But as Cole strangely withdraws and the zombies gain new strength, Ali knows one false step may doom them all.

Review:
Yet again I thoroughly enjoyed Gena Showalters unique twisted on zombies in the sequel the Alice in Zombieland, Through the Zombie Glass. Zombies are over used in movies and film these days so it's refreshing to see a creative mind make it something new so reader can gain a renewed interest in Zombies. I will be the first to admit Zombies are probably my least favourite paranormal creature, I normally don't read books about them or watch movies. That being said it really means something when I say I really enjoyed Through the Zombie Glass.
On a whole this series is on the darker side, but I did find that this sequel was a bit darker which I really enjoyed. On top of Ali having to battle against the Zombies she also has to battle with the darkness that is inside of here, which makes for a gripping story.
Through the Zombie Glass is sure to get your heart pumping with the drama that goes down; relationship problems, cat fights, spies, and of course a whole bunch of zombie action are a few things to look forward to in this instalment. I love the characters that Gena Showalter has created, they are all very loyal and if they were real I would love to be friends will a lot of them and more than friends with Cole.
With a darker plot, introduction to new characters, drama, and raising the stakes from Alice in Zombieland, Through the Zombie Glass is sure to be adored by fans of the first book. I would definitely recommend this book just for the emotions you will feel from the tension between Ali and Cole.
at Friday, September 13, 2013